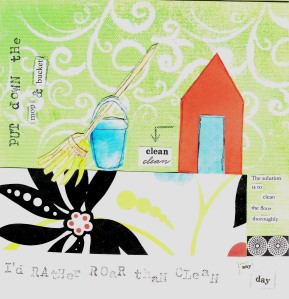 As my mother and I watched TV one night in the early 70s, I never suspected that the Flip Wilson Show would change my life. As we tuned in and adjusted the foil-covered rabbit ears, the fuzzy image on screen became clear. It was Helen Reddy belting out I Am Woman, the anthem that encouraged a newly empowered generation of females to roar. My mother watched, transfixed. When Helen stopped singing, my mother stood up and let out a barbaric yawp of her own. “I’m going to college,” she announced and left the room presumably to burn a bra before matriculating.

Watching mom navigate being a full-time student while also being a full-time parent and wife, I learned a lot of things. I learned how to entertain myself when she dragged me to her classes because the babysitter bailed. I learned that in the name of time management you have to set priorities. Given all she had to do, it’s no surprise that teaching me how to clean was never very high on mom’s to-do list. Thus began my blissful oblivion to dirt.

My first roommate used to lecture me with a toilet brush in her hand while saying, “How can you be such a slob when you have such good personal hygiene?” Even my five year old nephew noticed. During a visit to my house (in my defense it was during finals), he announced, much to the horror of his mother, “Aunt Denise your house is SO dirty!” A sympathetic friend once gave me a magnet that said: Dull Women Have Immaculate Houses. In fact, I could probably get a doctor’s excuse to get out of cleaning – I’m pretty sure that whatever optic nerve is required to see grime is not only dried-up, but is also dust-covered.

So when I hear women lament about their sloppy husbands, I have to clam up. The Husband’s knowledge and execution of all things related to cleaning is truly impressive. He’s a natural. He learned housekeeping skills from the Master, the Queen of Clean herself– his mother. Not only could you eat off any surface in her home, you could probably perform major surgery on the kitchen table using any nearby cutlery with much less risk of infection than any hospital OR in the country. So, of course, The Husband knows the names and purpose of even the most obscure household cleaning products. And he’s not afraid to use them.

But after a friend heard me whine about my housekeeping ignorance, she helpfully suggested that I follow her lead. “Get a cleaning lady,” she advised, “best thing I’ve ever done.” Now bear in mind this is the very same woman who will jump up mid-conversation and announce in a panic, “I just remembered, the cleaning lady is coming tomorrow! I have to go home and straighten up!”

But I’ll never have to resort to that. Because The Husband will always do a cleaning intervention before the Health Department slaps yellow “Biohazard – Do Not Enter” tape across my front door. And to any girls out there who might marry my sons one day, I promise not only to let dad teach them how to clean but to send them to Nannie’s Queen of Clean for a week of Household Hygiene Boot Camp.

I don’t blame my mom for not teaching me how to clean; she had more interesting things to do in the 70s. If there’s anyone to blame, it’s Helen Reddy. But that’s okay, because just like mom, I’d rather roar than clean any day.

This is the only known photographic evidence of me actually in the act of cleaning. This is just before she smacked me with the toliet brush.

A special thanks to my friend *R* who suggested I do some artwork to go with my columns. So this, of course, is all her fault.