I thought I had more sense than to do something so foolish. But after dropping off the kids at school, I decided to dash into Wal-Mart for a gallon of milk and dog food. Except I realized that not only was I braless, I was wearing this: 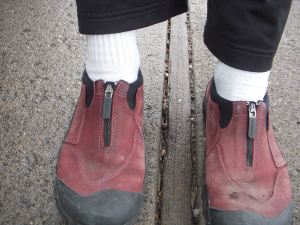 This is not a good look.

In fact, it dawned on me that I was dressed just like Grandma Kate on her daily outings to “The Wal-Mart” as she called it. Only she wore slippers. So I guess it’s a slight improvement.

Despite my lack of fashion sense, since high school, I’ve lived in mortal fear of finding myself in Glamour Magazine’s old back page feature – Fashion Dont’s. I remember in the 80s flipping to it each month and looking in horror at these poor women who were unsuspectingly captured as they strolled the streets of New York City thinking they were looking damn fine. There they were, black bars over their eyes, clad in in some visually offensive combination of a jacket with shoulder pads as wide as a refrigerator box, neon leg warmers over spandex pants with five inch spike heels and the worst of all, the off-the-shoulder, ripped sweat shirt a la Flashdance. A short narrative below each picture outlined the infractions as observed by the fashion police. And I was pretty sure that one day I was going to be there.

Clearly my fears were based in reality

So why do I care about a simple fashion infraction while running errands? Because I found the Big Box store equivalent of my feared Fashion Dont’s, The People of Wal-Mart , that’s why. What’s even more alarming than looking at the pictures is realizing that I share DNA with half of the mullet-headed ones from Kentucky. And sadly, there are a few roaming the aisles that I probably dated in the 80s.

I could most likely offer a plausible explanation to the police officer who pulled me over as to why I’m wearing my super-cute, red flannel Scottie dog PJ bottoms and slippers after dropping my kids off at school. But I’m going to have some ‘splaining to do if I turn up as Miss March on The People of Wal-Mart.

*Ten bonus points if you got the Ricky Ricardo, I Love Lucy reference