When you turn on the tap, you expect to get this:

But what would happen if it didn’t always look quite like this.  Might not take water for granted again, would you?

So today I remember my time spent living on a volcanic rock in the middle of the Pacific Ocean over twenty years ago as a Peace Corps volunteer where I learned some of the most profound lessons in gratitude for one simple thing that most of us take for granted on a daily basis –  Water.

Not a bad place for a volunteer gig, huh?

Now you would think that living in the section of the globe typically identified by an overabundance of blue, that water would not be an issue.  You would be wrong.  Whoever coined the phase, “water, water everywhere and n’er a drop to drink,” had obviously spent time surrounded by the undrinkable saltwater of the South Pacific.  And it wasn’t just regarding drinking, it was pretty much everything to do with the seemingly ubiquitous liquid.

For those of us hailing from North America, drinking that water was a huge issue.  There was no flipping on of the tap and gulping a big glass of H2O, particularly important in an equatorial climate.  Any water to be consumed by those of us with uninitiated intestinal tracts had to be boiled or bleached prior to ingestion.  If you failed to remember, there were consequences.  Severe penalties, after which you would NEVER forget again.  It was one such mental slip prompted by extreme thirst that led to my first water epiphany.  This flash of insight occurred at 2 a.m. in an outhouse where I was stared down by a spider the size of a frying pan.

The next revelation about water came after being dropped off at a squat concrete building – my new home.  After spending training time in a remote village, I was thrilled to discover an indoor bathroom.  There were faucets and handles suggesting that water was there for the using.  But as I learned, running water was an intermittent proposition.  And hot water? There might be a couple of knobs with a peeling letter “H” on them but all they did was spin like a roulette wheel.

One wise volunteer advised us to save water in the bathtub which seemed somewhat odd.  But given the fact that you’d be immersing yourself in the equivalent of an ice bath, a water holding receptacle seemed like the only suitable use.  “The water goes out, especially when it rains,” she counseled us.

But she was correct.  The first day long, cyclonic downpour interrupted our water supply right on schedule.  Turning on the tap revealed a stream that looked more like lentil soup instead of clear, although unpotable water.  Pretty soon, even the lentil soup stopped and left the spigot sounding like it was gasping for breath.

So now when I flip on the tap, I never, ever forget that it just might look like this: 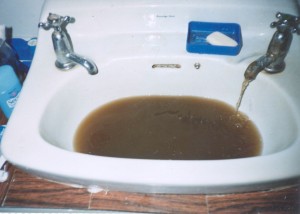 This, of course, explains why we had to drink so much beer.

It’s all about hydration, people.